To introduce my first on-topic post: some of these posts will be about books, some about nail polish, some about both. However, all will definitely be about art.

What better than starting off with Suzanne Collins’ The Hunger Games, wonderful books and films about imagination, fashion, and the connection between two different worlds? I love these books especially because the vision of the future that Collins paints seems very real when reading it (a bit like George Orwell’s 1984, I think: dim-lit, sad and full of unexpected horrors), and there is a perfect mix of adventure, romance, hope and injustice. After all, ‘who doesn’t like an underdog’? I know I like the sense of brewing revolution in a book..

In preparation for seeing the second Hunger Games film, I re-watched the first film a few days ago. And then of course I just HAD to re-read the book because I didn’t want the adventure to end.. I specifically did not want to read the second book before seeing the film though. So once I finished reading I thought it was about time to start my Hunger Games Nail Art!

Since I recently bought two colours from the China Glaze Hunger Games Collection, I really wanted to use those, but I was also eager to try out Effie Trinket’s nail-style from the first film, which looked like this:

Finally, I decided that I preferred trying out my new two colours and that Effie could wait (after all, I wouldn’t want to seem to be supporting the Capitol).

The CG colours I bought are Agro (representing District 11, Agriculture) and Smoke and Ashes (representing District 12, Coal). The first is a dark olive green metallic colour with gold flecks, the second a rich black with green micro-glitter. It is very hard to catch the colours exactly right, but here’s some pictures of both bottles: 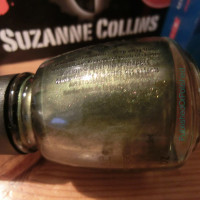 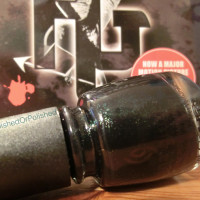 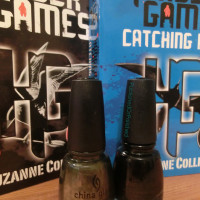 At first I was afraid the two of these did not really go well together, but inspired by Effie’s nails, I came up with this design: 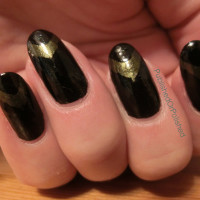 As you can see, the lines are not perfect, which is ok. I made the whole design without using any tools, just the polish brushes. I could have made the lines straighter using tape, but that would have taken a lot more time and possibly several Tape Wars.

In the lower picture, you can also see the flecks of gold and green in the green and black colours. 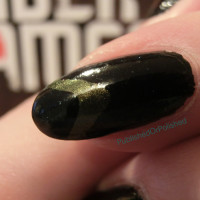 Overall, I must say, I really like the design! It wasn’t difficult to do and it creates a simple, geometric, tribal-yet-futuristic look which I find entirely fitting for the gloomy and industrial atmosphere of District 12 and the Hunger Games.

I for one am ready for the second film!