Over the past year, I have seen many wonderful watermarbling designs, so it was about time that I tried this technique out myself. I chose for a blue-white-gold colour scheme. Initially, I wanted to use two different shades of blue, but I encountered some problems with Essie’s Hide and Go Chic (and also, with OPI’s All Sparkly and Gold).

In theory, I know how this watermarbling technique works. In preparation, you need to put tape around your fingers, you require a small bowl of water, and some toothpicks (see step 1). Then, you drip one or two drops of your first colour in the water (don’t hold the brush to high above the water, because that will cause the polish to sink!) and watch it spread out nicely. The next colour you drip inside the circle of your first colour, and just keep repeating this step. After that, just make your pattern with a toothpick and dip your finger in the water, thus ‘catching’ the pattern on your nail. So far, so good. 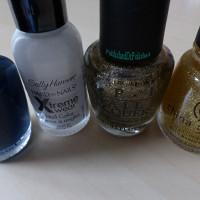 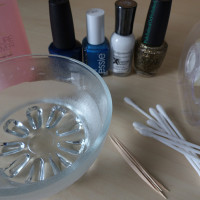 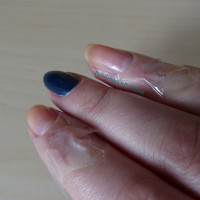 However, theory does not equal practice.. Which is where the problem starts.

Now, I have seen a lot of people that had problems with watermarbling, and they philosophise about the right kind of water, the right water temperature, and the ‘right’ kind of polish. Upto now, I just threw some water in a bowl and that was it. But I have started to believe in the existence of ‘right’ and ‘wrong’ polishes for watermarbling. The problem that occurred with me was that once I added a drop of either Hide and Go Chic, or All Sparkly and Gold, it spread out very wide, but the drop of polish after that would not spread at all. See step 2a. In the end, I decided the fault lay not with my skill, but with the polishes, so I stopped using Hide and Go Chic. I really wanted to use a touch of gold, though, so I waited with that polish until (almost) the last circle, when there would be less room for the gold to spread out so far. Also, the outer rings of polish have dried a bit by then, so the circle can’t move that much (see step 2b). Do you see how strangely the blue reacts once I dripped it into a circle of gold? It probably has something to do with the consistency of the glitter polish. In the case of Hide and Go Chic, I think maybe this polish doesn’t work that well because it is a rather thin polish, but I’m really not sure though. 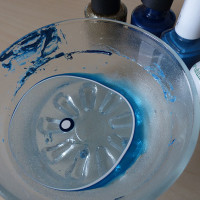 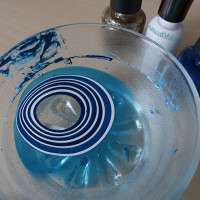 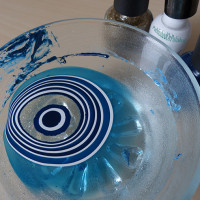 Once I finished all my circles and the polish seemed to be dry enough (practically no waiting required), I used a toothpick to divide the polish and create a pattern. Now, this is kind of difficult. You have to be careful not to mess up your plaque of polish by, for instance, pushing it to firmly against the bowl’s wall and thereby crushing it. Also, you have to make sure not to push the polish under water. If you can manage these two things, you can try to make a few ‘divisions’ with the toothpick and divide the circles in a shape you like. Just remember, more divisions is more difficult. See step 3 WM4. 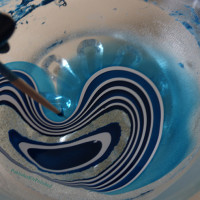 After this, you can dip your finger in the water and slide your nail underneath the part of the design that you like (you can even dip two fingers at once, if you dare). Then, carefully -not to fast and not to slow, and slightly obliquely – lift your hand from the water, making sure that nothing of the polish that you don’t intend to use flows over your nail (which I didn’t succeed in, as you can see on my right forefinger). Whilst lifting your finger from the water, use your other hand to collect the rest of the polish on a toothpick. This reduces your chances of making a mess

Notes for next time: do some try-outs to see which polishes work and which don’t. Also, maybe using a smaller bowl would be beneficial? That way, I could actually use the walls in making the pattern: the polish might stick to the walls and stay in place, so that the chance of it being ripped apart by the toothpick is reduced.

I finished the design by painting a few nails completey dark blue, with a layer of CG’s Golden Enchantment on top.
Ultimately, the results of my first try were not perfect, but I certainly like the patterns you can create. I think I’m going to try this technique more often and improve my watermarbling skills, because it is so beautiful! 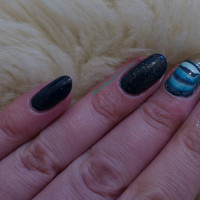 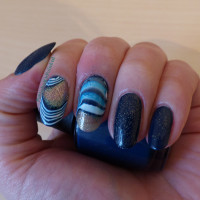 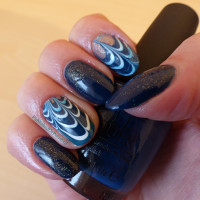 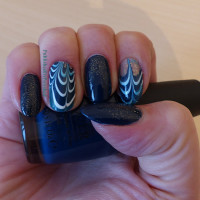