After a few days of fervent swatching, here are the KBShimmer Christmas polishes I talked about a few weeks ago! Let’s dive right in.

The first one is Christmas Now, a green jelly with several types of glitters in it. There’s two sizes of squares, stars, and a lot of different circles. The colours of the glitters are white, green, red, purple, and blue. It’s really kind of a party polish!
There is a lot of glitter, so fishing, even for the stars, is unnecessary. A little placement is needed, but most of it evens out when you apply the three layers of polish, which is really required to achieve full opacity.
Just for the fun of it, I decided to make this a flip mani (which is -apparently- on trend), which means that I painted the back of the nails a different colour. I chose blue (Essie – Butler Please) to match the blue glitter in Christmas Now. Looks cool, right? 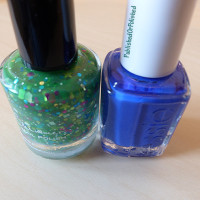 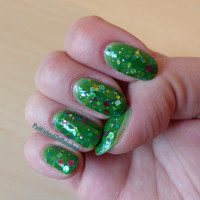 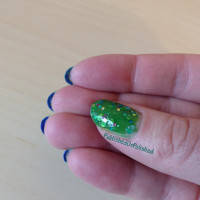 Now Pine-ing For Yule is a very Christmassy polish! Stacked with tiny silver holographic and red glitter dust, it features bright red stars and green holographic triangles (that totally look like trees, with a little imagination). The polish applies very easily, and where Christmas Now needs a thick layer of top coat to avoid the star glitter sticking out, these glitters stay perfectly flat on the nail. Since the glitters are floating in a transparent base, I used two coats over China Glaze Starboard. 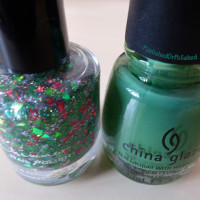 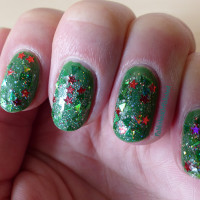 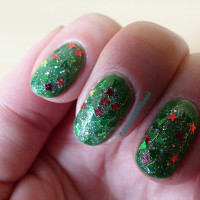 Deck the Halls is another polish with a green jelly base. This green is a lot darker than Christmas Now, it’s more of a holly green. This makes for a more classic-looking mani, very beautiful! The glitters are microglitter, stars, hexes and circles in a lot of colours: I see gold (which is holographic), green, blue and red. I used three coats for full opacity. 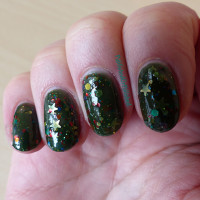 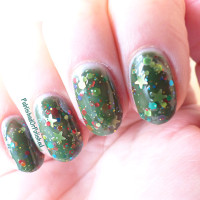 The last one is the easiest of the four, but very elegant in its simplicty. It’s called Kringle All the Way, which is, by the way, being sold among the 2014 polishes, but was also available last Christmas. In the pictures below, I did two coats over China Glaze’s most wonderful red Christmas polish ever – Ruby Pumps.
The base is -of course- transparent, and the polish contains silver, red and green microglitter, as well as smaller and bigger red, green and holographic silver circles. Love it! 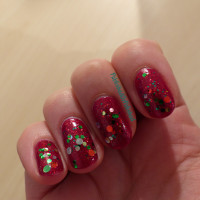 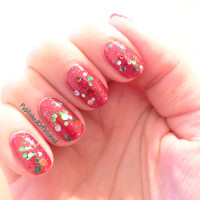 Have a nice Christmas Eve and hopefully, I will post the final Christmas design tomorrow (a bit late, but just think of it as a present 😀 )!